Carmine City, capital of the Arpaseni region, is the oldest Human settlement in Eastern Verlese. Home to the Doir it has grown from its ancient roots as a small fishing village into a thriving metropolis which sprawls along the northern shore of Carmine Harbour, and westward following the river Sekeem.

The City Wall, built during the period of Thraetian occupation, divides the town in two. The tightly packed inner-city lies to the east with the more spacious west featuring broad tracts of farmland meandering up to the eaves of Daeg Su Forest.

Occasionally called the “Leafy City” Carmine is dotted with parks of all sizes. East of the wall many of these follow the network of canals that flow from the base of the famous red cliffs which border the city to the north.

Carmine City has many options for accommodation, from youth hostels to upscale townhouses. For the average traveler the Lily Pad offers pleasant views of the Water Gardens and is walking distance from the centre of town. Aran’s Tall House B&B is situated further up the slope overlooking the whole city, and is a short walk from the local tram stop. Both are reasonably priced. 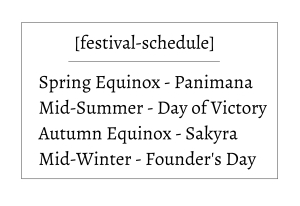 How to get there:

As a port city Carmine can be reached internationally by boat, or from other Verlesian locations via road. An express train line also runs between Carmine City and Tenibaru twice daily.