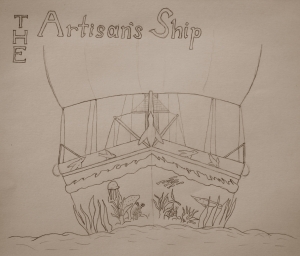 Long ago there was an Artisan in Carmine City who dreamt of a ship. Elaborately carved and painted with the forms of ocean creatures, their scales gilded with with silver and gold, it sailed beautifully through his dreams.

It so inspired him that he began to draw plans.

Night after night the ship floated in the ocean of his mind, and each morning he would copy down what he had seen, every small detail.

At last his design was complete, and he sought the city’s shipwrights. However, all of them, from the renowned to the novice, turned him away. His ship would be too heavy, they told him, too bulky. It would never sail.

But still the ship plagued his dreams, magnificent and bright, its sail more dazzling than sunshine on waves. At last, determined, he began to study shipbuilding.

For years he apprenticed in this new trade, learning all that he could. And every night he dreamt of his ship. Living alone in a small apartment by the docks he dedicated himself to his vision and, eventually, he became a master.

Opening a workshop of his own he refused all customers, and employed no one. No novice did he take to teach.

Night and day he laboured, sleeping in his shop amongst the dust and paint. And always dreaming.

The ship he built was perfect; elaborately decorated, it looked like a scene from a sailors legend, and was small enough to be sailed by one person.

On the day of its launch a great crowd gathered to watch. It was a glorious sight as the carved and painted vessel rode out on the gentle swell. The Artisan, now an elderly man, rode proudly aboard.

As the ship sailed further out into the bay, an afternoon storm blew in from the sea. The crowd watched in horror as the ship was tossed about and inundated time and again by massive waves. They soon lost sight of it in the heavy downpour.

The winds caught the ship, blessedly still afloat, and blew it to the centre of the bay where a small islet of jagged, crystalline, quartz emerges from the water. Against this merciless obstacle the ship was tossed.

By the next day the storm had blown over. The other shipwrights boarded their own small craft and sailed out to look for the Artisan and his ship. They found it at last, wedged high up between two of the crystalline spires, a bright remnant of the storm.

Inside the small cabin, carved and painted in the same ornate fashion, they found the body of the Artisan. He lay serenely on his bunk, and there they left him.

Although no one travels to the Crystal Isle, it is said that the ship is still there, tended by the small ethereal creatures that inhabit the rocky outcropping. And that on a clear day, if you look the right way, you can still see its colours undiminished by time, glimmering in the sun.